In online BPMN discussions some voiced concern that swimlane diagrams allow process fragmentation during design. It shows that process diagrams are being considered as a substitute for reality rather than a learning execrcise. Reality however, as Einstein made us aware of is not 3D but 4D, with time being an inseparable part of the continuum. 2D flowcharts diagrams are two dimensions away from showing a plausible model of reality. Therefore swimlane perspectives – when done right – can show the third dimension of organizational build and they show the fourth dimension in a timeline. And yes, in Papyrus ACM we see swimlanes as very helpful as to which elements of an end-to-end process are performed by which process owning team.

I take the view that process management should NOT build a command and control structure – but should foremost create understanding! As Russel Ackoff pointed out so eloquently in his lectures on Systems Thinking: taking a British car to pieces does not tell you WHY it has the steering wheel on the wrong side. An explanation as to why cannot be found by taking something to pieces but it is always outside in the relationships to the other elements. Taking a process to pieces in a flowchart does not tell you WHY a certain activity has to be performed. Even if you dissect it into the tiniest steps it won’t tell you that. A process diagram has to explain WHY a certain activity is executed in its relationship to the other activities. So much of the flow step by step analysis is irrelevant. A swimlane diagram however is pretty good in showing relationships in the added two dimensions. 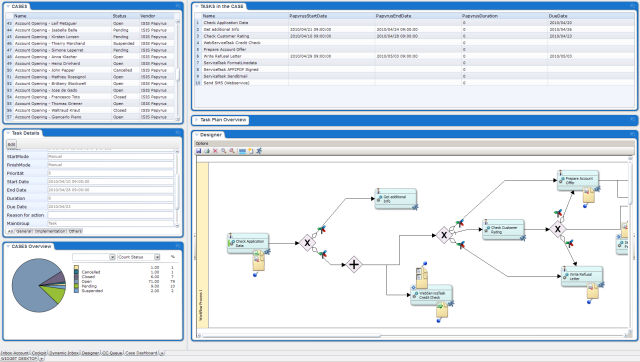 Additionally, one must be aware that swimlane diagrams should be a VIEW ONLY. If that is not the case, then wow, have you got the wrong software! It is a perspective that one chooses and not a system component or an element of structure. One can choose nearly any kind of affinity in a swimlane grouping. Using functional or departmental names as the titles of the swimlanes is as valid as any other view if it helps anyone. But does it help? Yes, they are good for chronological and collaborative views. A swimlane VIEW can be valuable as a perspective of timing relationship versus work assignment without a mandatory sequence of steps or activities. It obviously has a hard time to deal with mutliple process variants, but that is a process design problem not a viewing issue. We use for example swimlanes to assign subprocesses to process goals. Most people can understand that really well.

What can I do to deal with all the process variations? Easy, stop to design with the help of rigid flowcharts! Or even better, stop to DESIGN processes, period! Especially if there are many process variations, one must control the process progression of multiple, parallel activities with states and rules rather than rigid activity links and decision gateways. In the Adaptive Process model I propose, the various perspectives possible with a swimlane become very valuable. It can show role, team or department lanes and yes, some views may not produce practical results for some processes. A different swimlane view does not change the process design!

I am the founder and Chief Technology Officer of Papyrus Software, a medium size software company offering solutions in communications and process management around the globe. I am also the owner and CEO of MJP Racing, a motorsports company focused on Rallycross or RX, a form of circuit racing on mixed surfaces that has been around for 40 years. I hold 8 national and international championship titles in RX. My team participates in the World Championship along Petter Solberg, Sebastian Loeb and Ken Block.
View all posts by Max J. Pucher →
This entry was posted in BPMN and tagged BPMN swimlanes. Bookmark the permalink.
%d bloggers like this: